For this week in CEP 811, I explored making with the MaKey MaKey kit.  MaKey MaKey is a small device that connects to a computer via a USB port, and lets the user create an alternative keyboard for a computer.  Keystrokes could be mapped to letters or other functions, such as sound files. 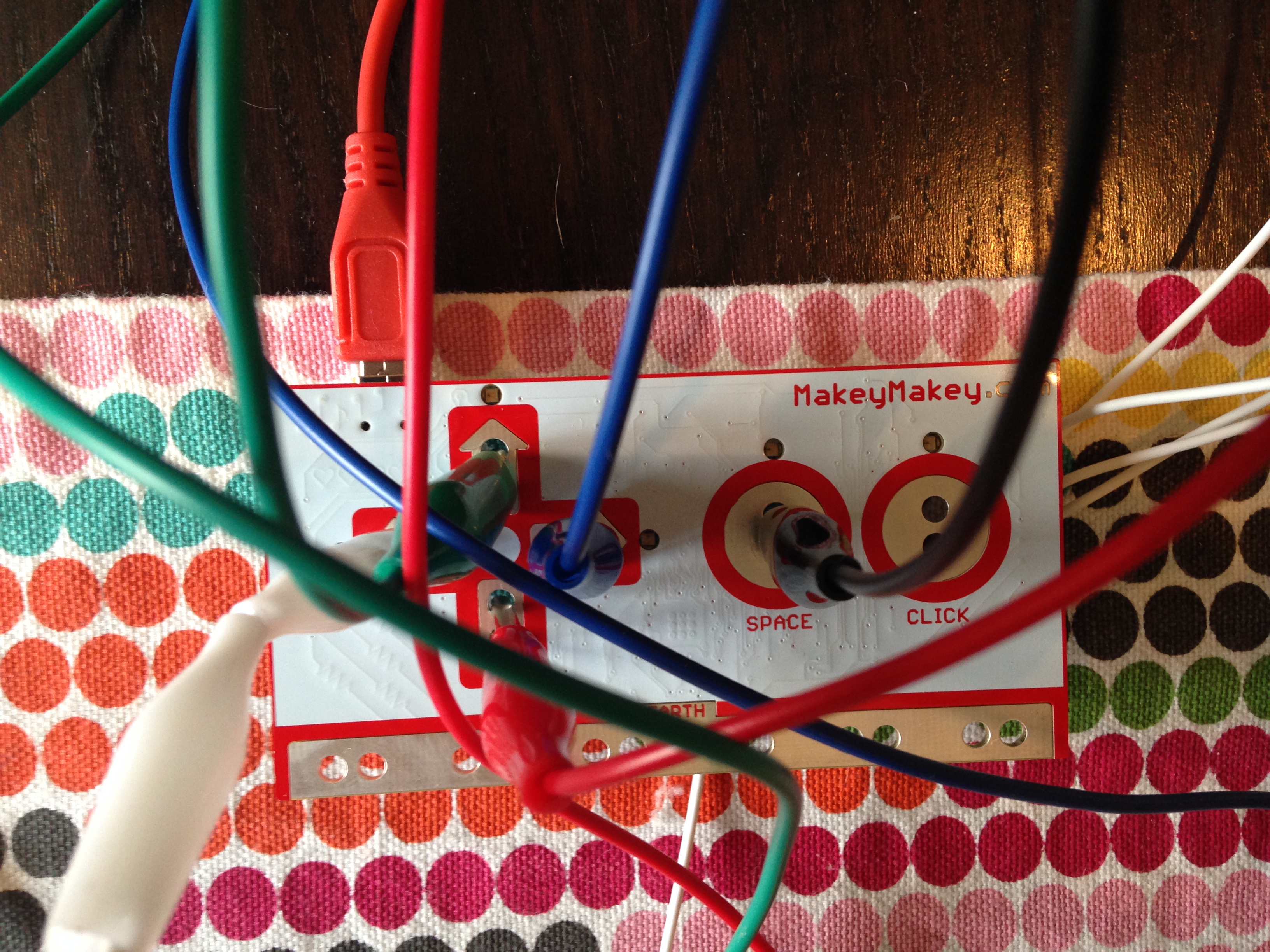 After visiting a variety of websites, viewing YouTube videos, and experimenting with Scratch programs, I was ready to create my own keyboard using MaKey MaKey. I tried to repurpose a variety of object in my house to create keys, with varying degrees of success. 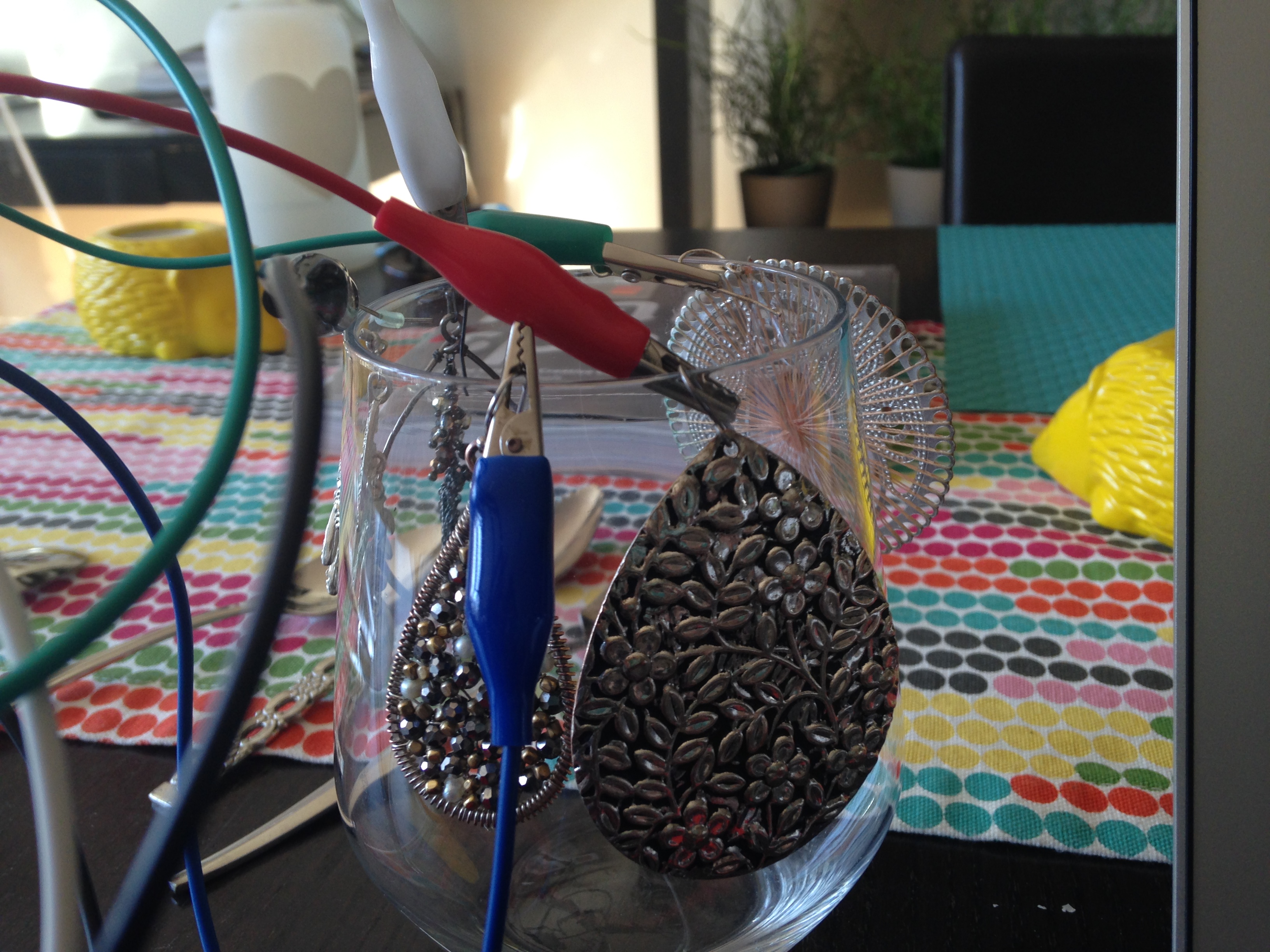 Earrings were not successful. 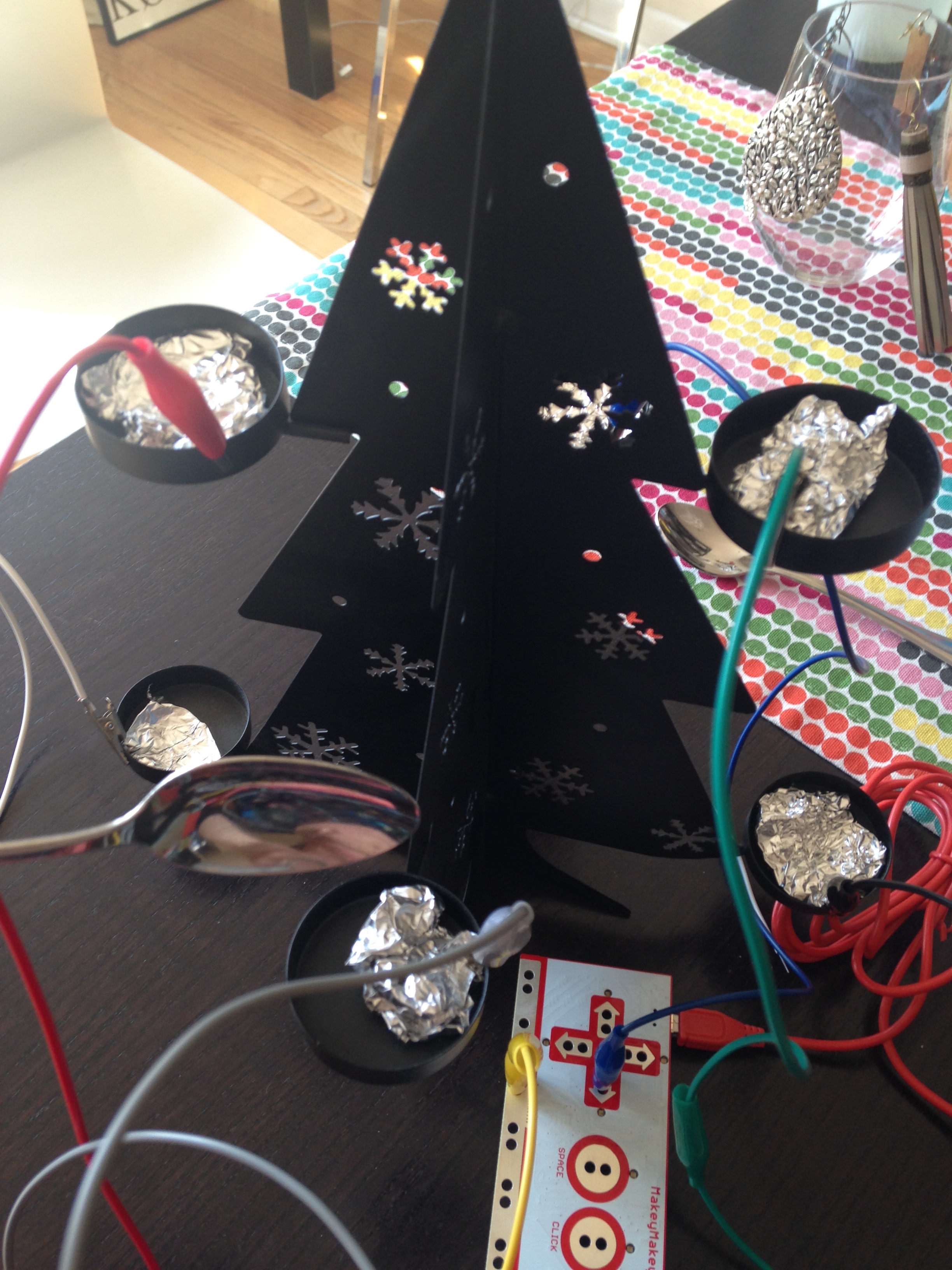 Testing out metal tree with foil and spoons. 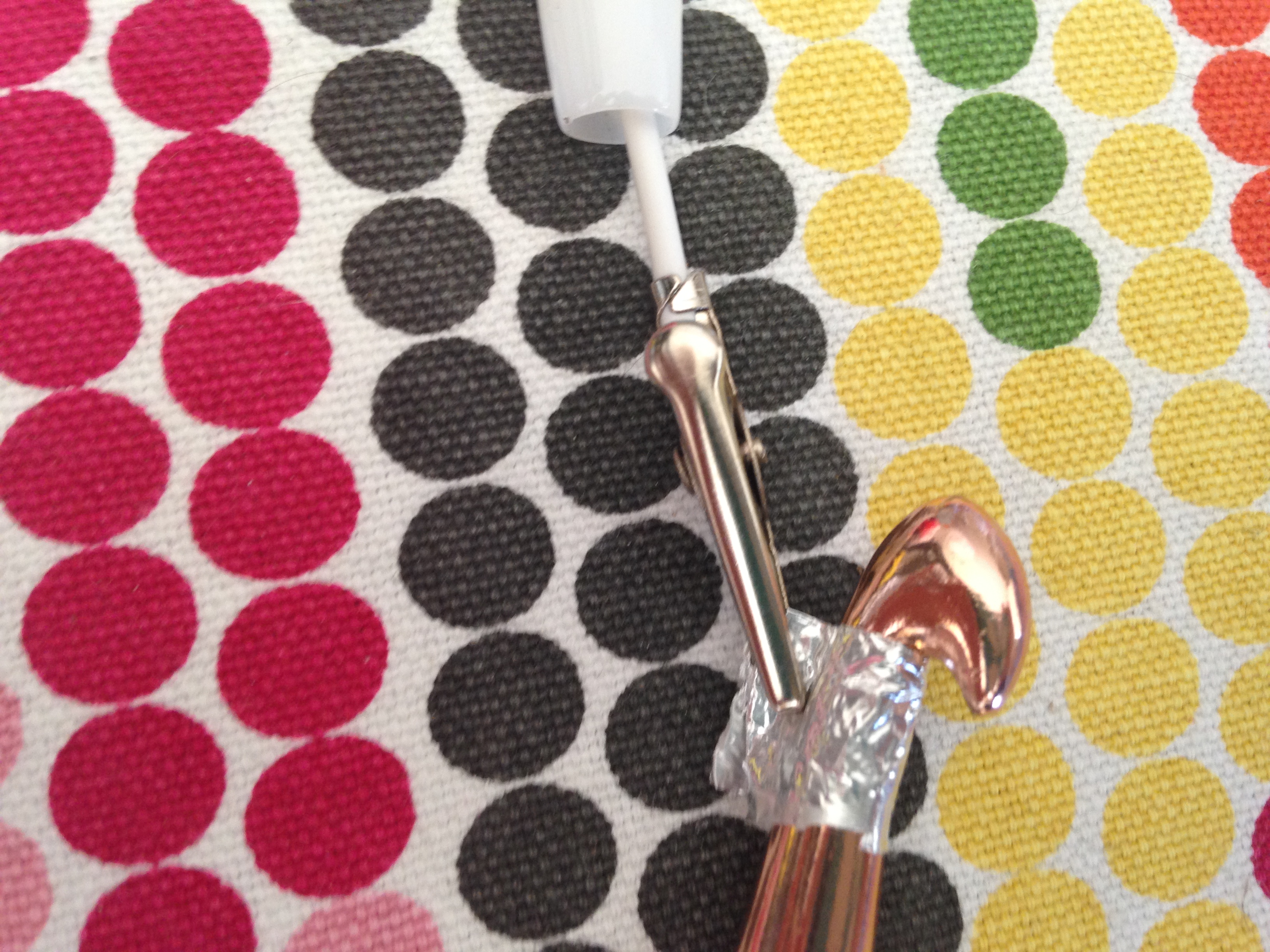 A crochet hook didn’t conduct unless wrapped with foil.

I finally settled on using spoons from the utensil drawer in the kitchen to work as the MaKey MaKey keys.  But what to have the keys do?  Since I am an elementary school librarian, I wondered how to make this tool fit my curriculum.  I liked the idea of having keys map to sounds. My first thought, after experimenting with the MaKey MaKey keyboard and various derivatives created by the Scratch community was to have students choose an instrument or varying tones and musically represent a book character or theme.

However, I had recently read The Squeaky Door with my primary classes.  This is a folktale retold by Margaret Read MacDonald, and has a variety of repeated sounds throughout the story.  What if the keys were mapped to those sounds?

Since the sounds I wanted were particular to the book, I had to create them.  This is something that students could do in the future.  I used a Voice Record app on my phone to record the sound effects.  My app lets the user upload sounds to a variety of places including Google Drive.  I uploaded the sounds from my phone and then downloaded them from Drive onto my computer. 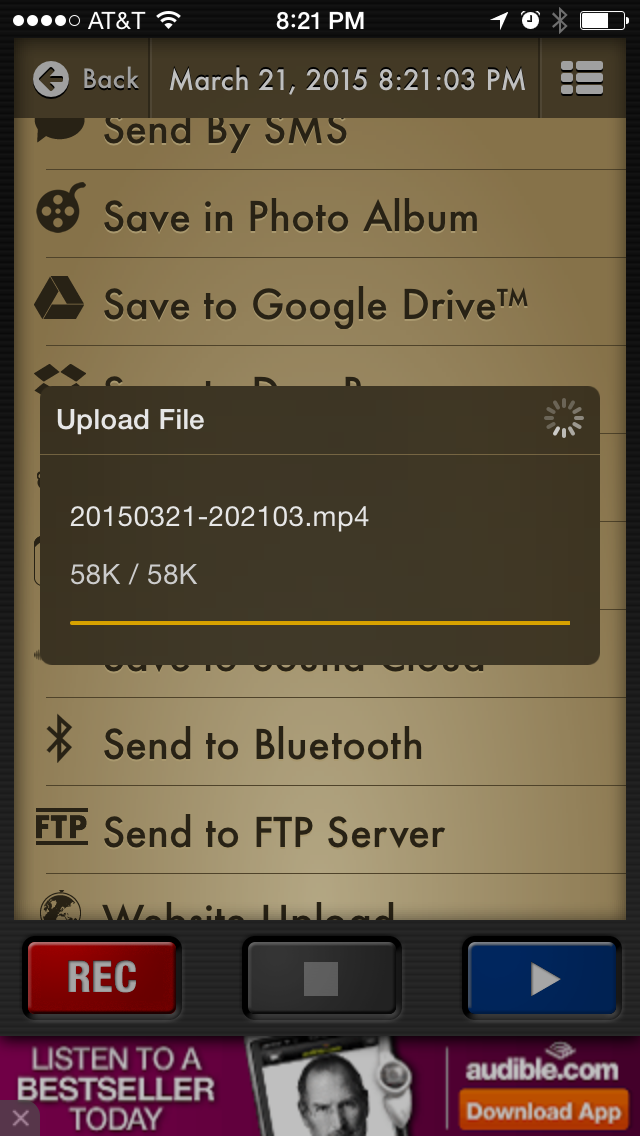 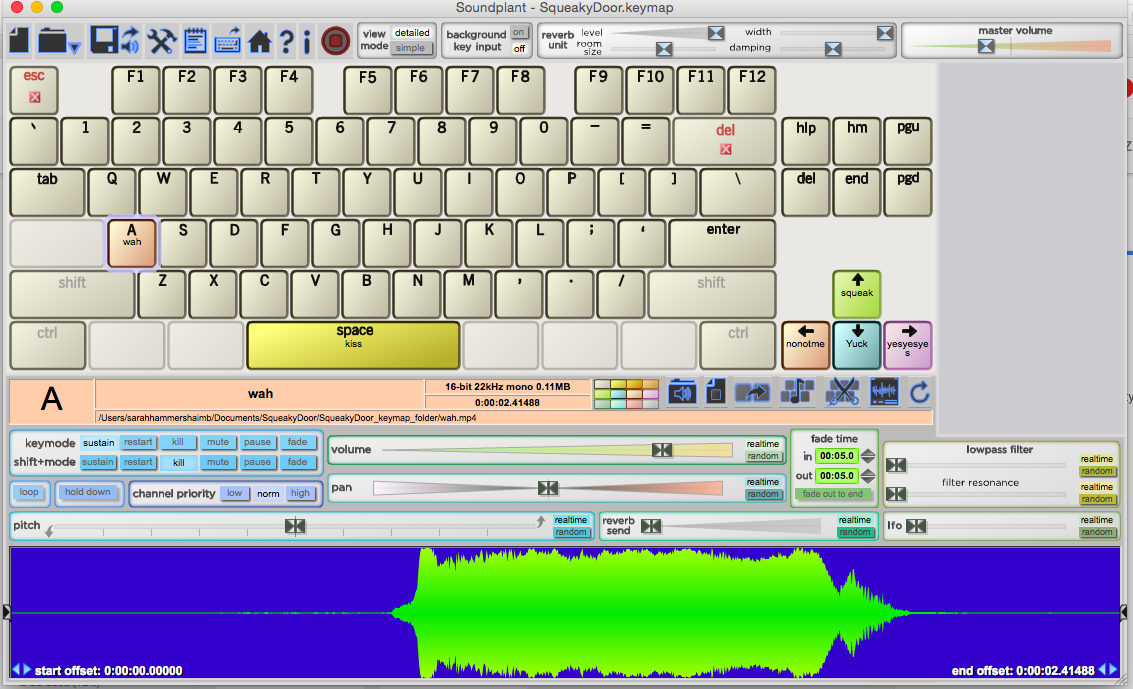 Finally, I was ready to test my creation.  I plugged the MaKey MaKey into the USB port on my computer, had the Soundplant keyboard open on the screen, attached the alligator clips to the MaKey MaKey inputs and spoons, and clipped the grounding wire to my ring.  When I touched one of the spoons, the sound effect was made.  Success! 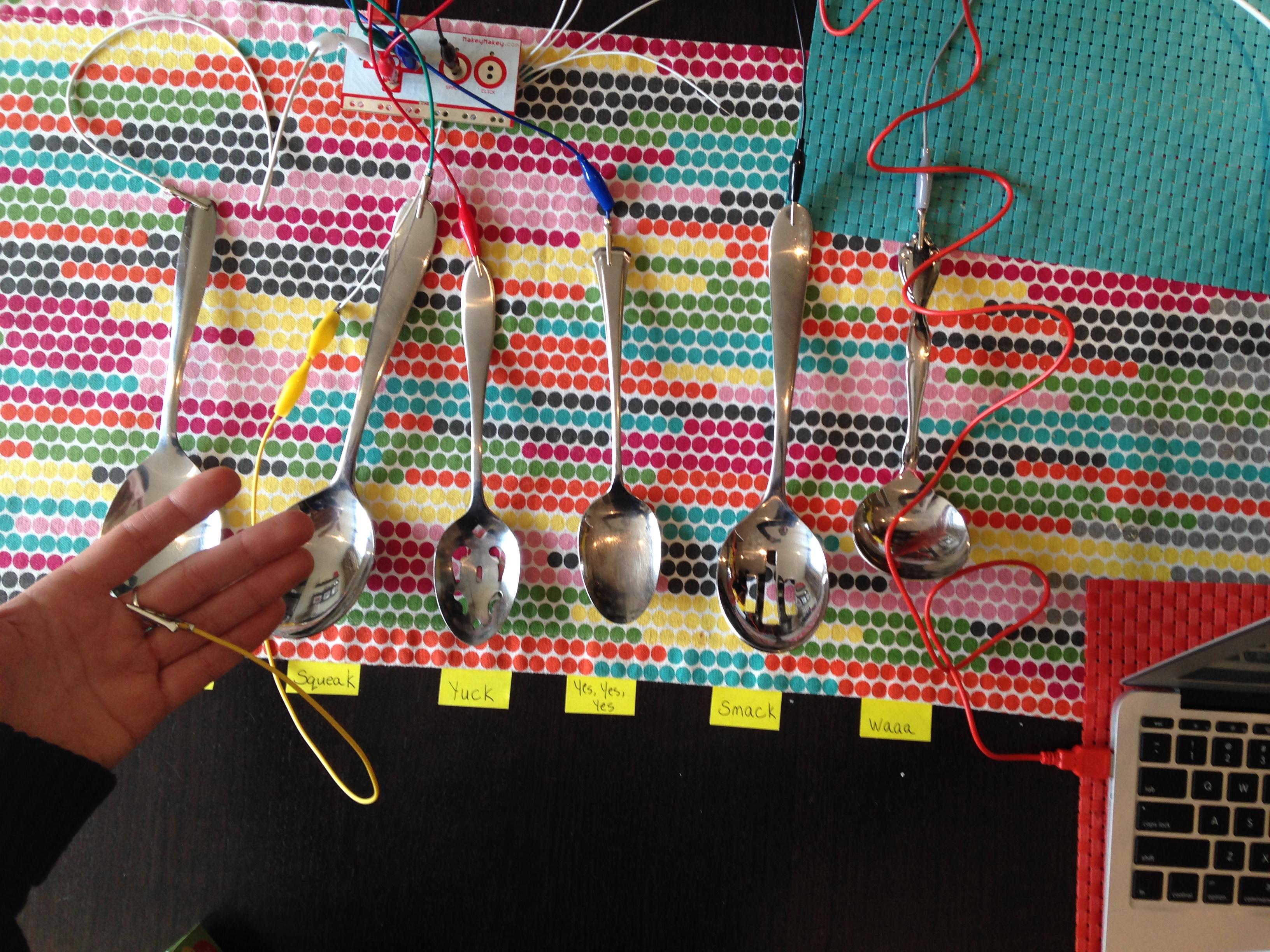 I enjoyed experimenting and playing with the MaKey MaKey.  I can see how this device could be used in a variety of ways in the elementary library.  For example, what if 1st grade students chose books, or wrote stories with sound effects?  Then, their 4th grade buddies could help them record the sounds and map those sounds to keys.  Using the MaKey MaKey, the 1st and 4th grade students would be able to retell stories in a new way.

*Note: Multimodal elements in blogposts communicate, inspire and educate.  Images communicate feeling and purpose beyond words.  They also can link the reader emotionally to the content and author. Moreover, especially in a “how-to” post, images and video provide learning support to visual and auditory learners.

One thought on “MaKey MaKey in the Library”